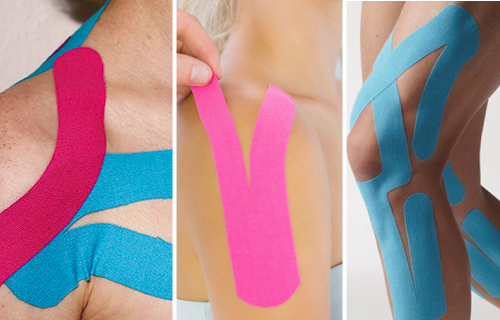 The Kinesio® Taping Method has taken the Rehabilitation and Sports Medicine world by storm. This amazing taping method was developed in Japan in the 1970’s by Dr. Kenzo Kase. Since then, Kinesio® Taping has become the gold standard for therapeutic and rehabilitative taping. This proprietary method of taping uses a uniquely designed and patented tape for treatment of muscular disorders and lymphedema reduction, among other things.

The Kinesio® Taping Method involves taping over and around muscles in order to assist and give support or to prevent over-contraction. The first technique gives the practitioner the opportunity to give support while still maintaining full range of motion. This enables the individual to participate in his/her normal physical activities with functional assistance. The second technique, which is most commonly used in the acute stage of rehabilitation, helps prevent overuse or over-contraction and helps provide facilitation of lymph flow for an entire 24 hour period. Correctional techniques include mechanical, lymphatic, ligament/tendon, fascia, space and functional. Kinesio® Tex Tape can be used in conjunction with other therapies, including cryotherapy, hydrotherapy, massage therapy and electrical stimulation.

Kinesio® Taping affects the activation of the neurological system and the circulatory system. Muscles are not only attributed to the movements of the body, they also control the circulation of venous and lymph flows, body temperature, etc. Therefore, the failure of the muscles to function properly induces various kinds of symptoms. Consequently, more attention was given to the importance of muscle function in order to activate the body’s own healing process. Using an elastic tape, such as Kinesio® Tex Tape, it was discovered that muscles and other tissues could be helped by outside assistance. Kinesio® Taping is an innovative approach to treating nerves, muscles and organs.

What Our Patients Are Saying

I received treatment after several surgeries not thinking I would have any sort of function,strength or range of motion. The proprietor Chris is top notch!He got me motivated and back to a good mental and physical state. I would recommend Chris and his associates to anyone who goes through anything minor or major. Thanks for everything!